Removing excess levels of iron and manganese from water

Manganese is a mineral, naturally occurs in rocks and soil and may also be present in groundwater. Manganese is seldom found in isolation in a water supply but is frequently found in iron-bearing waters. Manganese may become noticeable in tap water at concentrations greater than 0.05 milligrams per litre (mg/l) by imparting a colour, odour or taste. However, negative health effects from manganese are not a concern until concentrations are at levels approximately 10 times greater at 0.5 mg/l and above.

Iron is the most common dissolved chemical in groundwater from wells and springs. Although not considered to cause health problems in humans, its presence in potable water is rather unpleasant, due to the odours it spreads; its rusty taste and colour; its feel on skin and hair and its tendency to stain clothing.

In addition, the presence of dissolved iron enhances the growth of iron bacteria, which forms dark-coloured slime layers on the inner side of a system's pipes. The slime is then released into the network through water flow fluctuations, leading to dirt build-up and damage to the plumbing.

Allpump Services has been using Crystal Right™ media for several years with considerable success in its water filtration systems. Crystal Right removes iron, manganese and hardness (and reduces ammonia). Crystal Right also balances the pH in the water. Crystal Right works at its best on clear water, i.e. when the iron/manganese are in a dissolved form. Crystal Right will also reduce hardness with no extra treatment.

There are two types of Crystal Right. CR100 is used where the pH is between 6 and 7 and CR200 is used where the pH is 7 or above. Crystal Right has several advantages over conventional systems in that pH correction, iron/manganese removal, ammonia reduction and softening can all be addressed in a single process. It can reduce dissolved iron and manganese even at pH 6 (most other medias cannot).

Crystal-Right works in a similar way to a water softener by removing hardness. It uses salt to regenerate the silicate crystals periodically, depending on the level of hardness in the water and the amount being used. The use of Crystal-Right requires a minimum hardness of 50 mg/l and a minimum TDS (total dissolved solids) of 80 mg/l.

Crystal-Right is particularly good for removing manganese as this mineral is notoriously difficult to remove at low pH levels.

The complete filtration unit comes with filter valve, composite vessel and brine tank to hold the salt. Allpump Services can supply you with replacement bags of salt at competitive prices, always in stock, here at our St Clears’ premises, just off the A40. 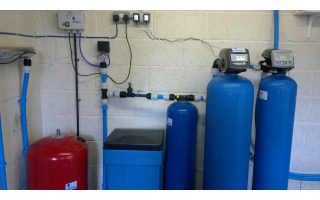 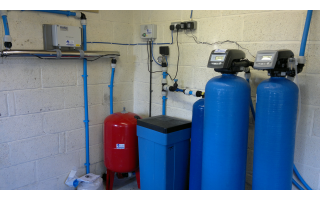